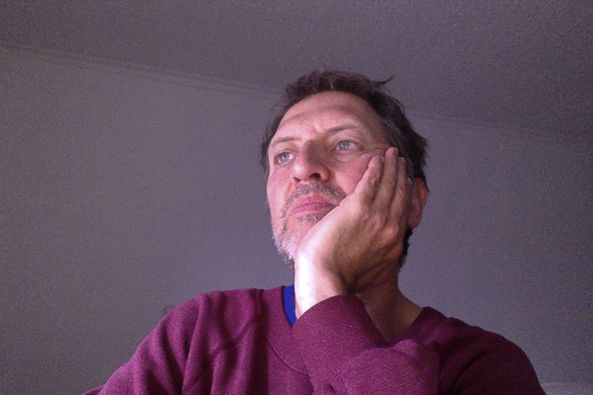 Éric Mézan lives and works in Bellême, Perche, and in Paris. He studied history of art at Sorbonne University and military strategy at École spéciale militaire de Saint-Cyr.
In his studios, in Perche and in Faubourg Saint-Antoine in Paris, he leads on a exploratory mode his work as a photographer, as a ceramicist, he conducts his research on sound, video, and he draws.
Child soldier, it was at the age of fourteen and a half that he became a photographer. As he learns to shoot an assault rifle and to jump with parachute, he learns in parallel with the development and prints of his own photographic negatives in the silver laboratory. He enters Saint-Cyr at the age of 19 and a half, then he joined the Paris Fire Brigade where, as a young officer, he carries out for several years operational responsibilities in units fire and rescue. He organizes his first exhibition at the rescue center de Château-Landon in the 10th arrondissement of Paris.
As the 2000s approached, he continued his photographic research and co-curates numerous exhibitions such as La Plaque à Marcel, I don’t have a group spirit, Not a Lear, etc., with the curators Laurent Goumarre, François Quintin, Jimi Dams, etc. He also assists the artist Tania Mouraud for several months while continuing his studies with Serge Lemoine and Jean-Claude Lebensztejn in DEA History of Art at the Sorbonne.
In 2000, he founded Art Process, a contemporary art agency that attracts quickly a clientele of private and institutional collectors for whom he organizes international "expeditions" in the contemporary art world in London, Berlin, Rome, Madrid, New York, Miami, Moscow, Tokyo, Beijing and Shanghai. He then made more than fifteen thousand shots and sequences filmed on all the continents where his travels lead him.
For two years, he trained in beekeeping at Société centrale d'apiculture and at Union apicole ornaise, then became a beekeeper in Paris and Perche. He is now leading this beekeeping adventure as a real agricultural and artistic project on the matter of the living.
In 2021, he will inaugurate Villa des Illusions, an artist-run space in Perche founded with novelist and essayist Nane Beauregard. They will offer artist invitations and residencies, an exhibition space, a house publishing books and artists’ objects, three workshops (ceramics, photography, sound) and a beekeeping house.
www.ericmezan.com
@ericmezan
#conceptualphotography #ceramique #editeur #apiculteur #commissaire #clay
#handbuilding #villaillusions