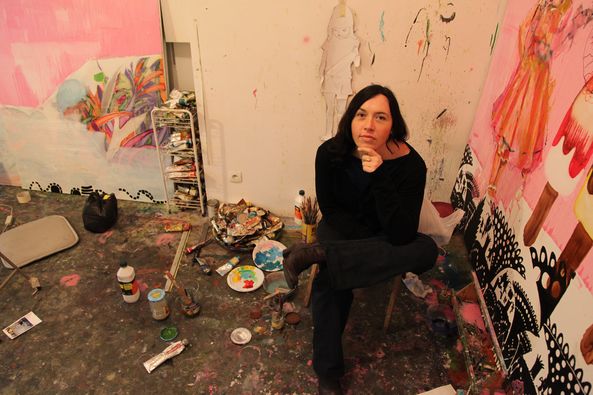 Florence Reymond was born in 1971 in Lyon. She works in Paris and exhibits regularly in France and abroad.
Graduated from École des beaux-arts de Saint-Etienne in 1994, she completed an Erasmus exchange at the Kunst Akademie in Karlsruhe. Represented from 2007 till 2019 by Odile Ouizeman gallery which dedicates several solo exhibitions, she takes part in fairs abroad: Drawing London, Art Brussels, Art Moscow, Art Berlin. In 2007 she took part in the exhibition Peinture(s), génération 70! Curated by Philippe Piguet at Salomon Foundation.
In 2013, she had a solo exhibition, La Montagne cent fois recommencée, at Centre d'art du Creux-de-l'Enfer in Thiers. On this occasion a monograph / DVD is published by éditions Analogues.
Among her group exhibitions, we can mention The Paul Dini Museum, the Robert Dunois-Corneau Museum, Annecy Abbey, the House of Art Bernard Antonioz and the Espace d'Art Camille Lambert as well as the Titanic in Vilnius and HangArt in Austria.
Her works are present in the collections of the FNAC, the Salomon Foundation for Contemporary Art, of the Colas company, the Paul Dini Museum ...
She was the winner of the Prix de Novembre in Vitry and won the 3 rd
Marin award in 2010.
Recently, Orangerie de Sucy-en-Brie and Maison des arts de Châtillon dedicated to her a solo exhibition and a small catalog : Vénus, par-dessus la jambe in 2019, and La Déesse muette in 2020.
www.florence-reymond.wixsite.com/monsite-1
@reymond.florence
#jaune #cadrage #désapprendreapeindre #manteaumaison
#toucherenoir #primitif #gestesjouissifs #peintureentraindesefaire
#voluptee #gestesenfantins